Peopled with richly drawn Dickensian grotesques and filled with bizarre and comical incident, Munky is as compelling as it is antic. Catling transports the reader to an interwar England in the throes of change. Part bizarre ghost story, part whimsical farce, part idiosyncratic literary experiment, it could be described as P. G. Wodehouse collaborating with Raymond Roussel, with a dash of M. R. James, if it weren’t so uniquely its own thing.

B. Catling, RA, was born in London in 1948. He is a poet, sculptor, filmmaker, and performance artist, currently making egg-tempera paintings and writing novels. He has held solo exhibitions and performances in the United Kingdom, Spain, Japan, Iceland, Israel, Holland, Norway, Germany, Greenland, USA, and Australia. His Vorrh trilogy and recent novel Earwig have drawn much critical acclaim. He is also Emeritus Professor of Fine Art at the Ruskin School of Art, University of Oxford.

Timothy J. Jarvis: Munky is many things, a novella that covers a staggering range of modes and styles. But at heart it is a ghost story. Do you enjoy supernatural tales? Any favourite writers?

Brian Catling: Supernatural tales and all the enigmas of life, which get seen in the periphery of normal vision, are a great fascination to me and always have been. Poe is the base of all things. Then the rest of the usual suspects: Arthur Machen (do you know the compelling story of Tessa Farmer?*), M. R. James, Lovecraft, etc., and I have a fondness for Blackwood who I think is often under ranked.

[*Tessa Farmer is  sculptor who is Machen’s great-grandaughter, and whose extraordinary work, made from insect carcasses and other natural materials, depicts malevolent fairies that resemble in some ways those in certain stories of her forebear’s, though she was unfamiliar with his work when she started making them. – Ed.]

TJJ: Munky is also a comedy of manners, in a very British vein — there are some really memorable comic scenes, including one hilarious and acerbic treatment of the social and class niceties of the taking of high tea. What inspired you to bring together the two quite disparate modes of the ghostly tale and the farce?

BC: I never plan my writing in any academic or system-based control. It is all a flowing out. Its momentum gathering images and bits of storage on its way. So to answer this question: I was spending more time in and around Dorchester Abbey, hearing the church and village stories about the living and the dead. Then I found myself face to face with the pencil drawing of the publican of the George Hotel, who claimed to be the heaviest publican in the UK, in the 1950s. Two pints later in the empty bar, the ghost monk walked in, and the story started. How else could it be anything other than it is? It’s England. Farce is only a separate subject when it’s French. And humour is staunched in the mouths of the American ghost writers until it reaches Ray Bradbury.

TJJ: As a follow-up — Pulborough, the setting for the story, is on the one hand a quaint English village of a recognisable type, and on the other, a place built on the banks of the once great river Tysmundarum and surrounded by ancient earthworks haunted by “elder brooding forces”, the influence of which the village’s abbey was established to ward off. What role does bringing together the mundane with the liminal and numinous play in this story? And in your work more generally?

BC: The liminal and the numinous are my natural haunts. Amplifiers to the imagination and buffers to the dreary description of everyday life. The very air buzzes in the space between them.

I feel it as a constant in most places that give you time to stop and listen. A village history (stories told backwards). Always seems more alive at twilight and dawn. When all the other animals walk abroad. Churches often become the resounding chamber for the very thing they are built to suppress.

TJJ: You often make use of figures drawn from history in your writing. There’s a certain resemblance between Munky’s “Ghost-Finder General”, Walter Prince, and the real-life ghost hunter, Harry Price. Is Price a figure you’re interested in? What led you to put him into your story?

BC: Harry Price keeps getting in. Have you seen the film of him talking his “lab”? A twitching, snobbish, born liar, whose own personal form of womanising removes him from a Carry On cartoon, into a grotesque Uriah Heep/Jimmy Saville hybrid. His books groan with inflated importance and wasted opportunity. The Return of Miss Stella C. and The Haunting of Cashen’s Gap being the most blatant. Most psychical investigators treat him as an embarrassment because how far he dragged down the credibility of the subject. He is a perfect and demanding character who will always have something else to tell me.

TJJ: The Haunting of Cashen’s Gap tells the story of the investigation into the Dalby Spook, the talking mongoose, Gef, who lived behind the wooden panelling of a farmhouse on the Isle of Man in the 1930s. I know you have a fascination for this phenomenon. Gef’s “haunting” was characterised by a puckish nature, not dissimilar to that of the ghostly monk in Munky. Are you drawn to mischievous spirits of this kind?

BC: Have you seen Vanished! A Video Séance, the Gef story Tony Grisoni and I made? A mischievous spirit seems to offer more than a terrifying one. Because it demands instant reflection between two worlds and hold its presence in comparison. We smile as much out of nervousness as we do out of joy. The transcendent entity also tests and illuminates the gateways of reality, which evolves our perceptions. Much in the same way that the Khidr, the Islamic green man, and the Celtic Trickster do. Its enigma is active in perversity and therefore not in the declaration of death.

Gef had a cameo part in my new book Hollow. But upstaged it to become an almost major character (I should have guest!). He shuffled in and out of a fleet of Bosch creatures that somnambulistically stumble into agreed reality to find out what they are. 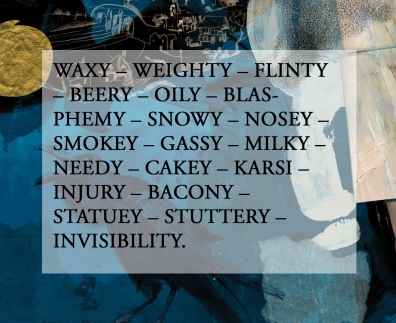 TJJ: There seems to be an enigmatic linguistic ritual behind the narrative of Munky that is reminiscent of the oeuvre of Raymond Roussel, a writer who has been a character in other work of yours. And your literary poetics has its roots in innovative and playful poetry. How does experimenting with language feed your fiction practice?

BC: Again, I am afraid it’s difficult for me to answer your question, because I am not conscious of literal and linguistic streams, and experiments in my writing. This must come from early dyslexia and an art school education, rather than an academic literary one (thank God). My poetry is constant and in deep league with my visual imagination. This much I know.

So the critical and editorial surgery always occurs after the accident of writing has happened, which might seem pathological. Raymond Roussel is a typical example. My first and significant influence came from the visualisation of the tableaux and machines he invented in Impressions of Africa and Locus Solus. Not from the convoluted experiments in the structure of language that he devised to create them. That was never my concern. When it comes to poetic language I grasp the opposite terminals of Beckett and Kipling to recharge my batteries. With bit of J. H. Prynne, Flann O’Brien, and Yeats thrown in to confuse the voltage.

TJJ: Are there any other important precursors or contemporary influences on Munky?

BC: I don’t think Munky would have existed if I hadn’t read The Third Policeman and The White Hotel in my youth.

TJJ: Since you began publishing fiction, you’ve worked with publishers both large and small. How have you made radical practices work in the mainstream? And is there something freeing about working with small presses?

BC: I greatly enjoy working with presses of different size. Being given an agent was the only thing that shifted my writing from small presses to mega ones. I personally did very little to make that occur. And intend to continue working between the international and the intimate and love the quality of a press like Swan River.

BC: Last year, Only the Lowly came out with Storr Books, a small press who wanted to do it as their second publication. And Earwig, which was published by Hodder & Stoughton, soon to be made into a feature film by Lucile Hadzihalilovic.

The final edit of Hollow has just gone back to Random House/Penguin, NYC, for publication next year. Think of it as Peckinpah meets Bruegel, on the snow-covered mountain which was once the Tower of Babel. With lots of escapees from Bosch paintings getting in the way.

And I am now working on a ghost story set in stone called Transi. Which is the name given to cadaver effigies, in tomb sculptures, in the late Middle Ages. Not a lot of knock-about comedy in this one.

TJJ: And lastly, I know that William Blake is an important figure for you. To what extent do you think a Blakean visionary approach to art is possible in the early twenty-first century? 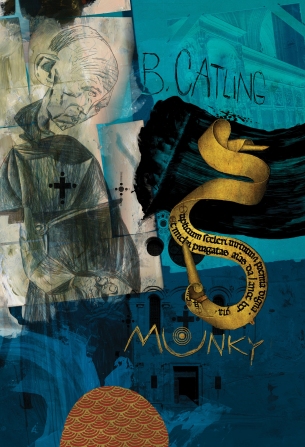 BC: Blake is another Khidr, he won’t go away. It’s not his visionary approach that fascinates me. It’s his down-to-earth need to get things on paper. For me he is not a frocked dreamer wafting about and talking to angels. He is a grafter, a working man, whose small factory was crowded with other beings while he daily had to make crappy prints for other artists. His own work sandwiched between his bread-and-butter labour without ever becoming infected or diluted. For me that is a much weirder picture than the hippy poster of him. Gawd knows about his work in the art of the twenty-first century . . . I never understand or care to place art in those restriction. All my tenses are continually jumbled. A constant joy to my editors.

Order a copy of Munky.

Timothy J. Jarvis is a writer and scholar with an interest in the antic, the weird, the strange. His first novel, The Wanderer, was published by Perfect Edge Books in 2014. His short fiction has appeared in The Flower Book, The Shadow Booth Vol. 1, The Scarlet Soul, Murder Ballads, Uncertainties I, and The Far Tower, among other places. In 2020 he edited Uncertainties IV for Swan River Press. He also writes criticism and reviews, and is co-editor of Faunus, the journal of the Friends of Arthur Machen. timothyjjarvis.wordpress.com

In Deep League: A Conversation with B. Catling
Loading Comments...