Those sensitive to mild spoilers may wish to avert their eyes. – Ed.

In a ‘blurb’ for its new edition of Ethel Mannin’s novel Lucifer and the Child, the Swan River Press claims that this book was for many years on the list of ‘banned books’ in Ireland. If so, it was with good cause. This is a book that glamorises the Devil, irreligion and pursuit of the path of wickedness. It is an insidious book. It draws one in. It is a book that exerts a quiet and ensorcelling, but not a wholesome, power. Like Jenny Flower herself, it gives off, in spots, a heady whiff of ‘gutter panache’ in spite of its often exquisite penmanship. A discerning reader should run no risk to his or her immortal soul, but the same cannot be said of enduring peace of mind.

Among his aromatic armada of apothegms in the Preface to the second and expanded version of The Picture of Dorian Gray, Oscar Wilde memorably avouched: ‘There is no such thing as a moral or an immoral book. Books are well written, or badly written. That is all.’ Advance extenuation perhaps for the work that lay before the reader to read. Wilde need not have worried. But Ethel Mannin’s Lucifer and the Child puts one on uncomfortable proof of this maxim; or else goes to refute it. The book is certainly well written, emphatically so, and sparked up, at times, with passages of striking beauty. But is it a ‘moral’ book? Well . . . As Lucifer might have said within, ‘it all depends on what you mean by moral.’

The principal character, and the ‘child’ of the title, is Jenny Flower, ‘a thin, dirty, under-sized wisp of a gutter-kid,’ who may or may not be of the family of two sisters burned for witchcraft in the early 1600s. She is the natural daughter of Nell Flower, a barmaid at the Seven Bells in London’s docklands, and is brought up as the child of her mother’s brother Joe and Joe’s wife Ivy. Joe is a handsome if sparely spoken sulker, his wife a disappointment-bitten shrew. They have two sons. Home life is not especially happy.

Jenny was born at Hallowe’en, 1924, one of four witches’ sabbaths in a year. On another of these, Lammas, 1st August, 1931, during a school trip to the countryside, Jenny gets lost in a wood and meets a dark and handsome stranger, with horns, who befriends and introduces her to the natural wonders of the woods. When she grows tired, he takes her back home to London by train. If she needs him, he says, she will meet him again.

Returned to ordinary life, Jenny befriends an ancient witch-like woman, who purports to be in fact a witch, and who lives in a filthy novel in the evocatively named Ropewalk Alley, a rickety tumbledown place near the Thames. This is Mrs. Beadle, to whom Nell Flower had applied for a herbal mixture to induce abortion, when she got pregnant with Jenny. More often than not, Mrs. Beadle’s cauldron-concocted remedies don’t work, but people keep coming back and send their friends, ‘on the principle that what doesn’t work in one case might in another – the old Ropewalk Alley principle that you never knew’. Mrs. Beadle’s house is a trove of witchcraft lore and demonology – and cats.

There is a young school teacher, Marian Drew, daughter of a somewhat unconventional clergyman in Wales, who befriends Jenny and tries to reform her. Her efforts towards friendship at least seem not wholly unavailing, until Hallowe’en, 1931, Jenny’s seventh birthday, when at an annual fair in the docklands waste ground, the high point of which is a huge bonfire re-enacting the Great Fire of London (a deft authorial touch, which prefigures the climax of the novel during the London ‘blitz’ in 1940), the dark stranger, sans horns, reappears. Off a ship, perhaps. From this point on, the dark stranger, whom Jenny thinks of as Lucifer, is a recurrent element in the girl’s life, though he appears seldom, in the first year only on witches’ sabbaths, and thereafter less often still. Marian meets him and finds herself attracted to him, even as she tries to persuade him to stop acting the part of the Devil and seeks to wean Jenny from his influence.

The stage is set for a drama among vividly drawn personalities, of whom hardly one of them is especially likeable. Mannin divides her novel into halves of unequal length. The first, and longer, depicts Jenny’s life from her first encounter with Lucifer on Lammas of 1931 to her fourth – following, in addition to Hallowe’en, Candlemas: 2nd February and May Day: 1st May – on Lammas of 1932, when Lucifer takes Jenny and Marian Drew on a day-long excursion by train to the country. By this stage, Jenny has already, in an eerie invocation scene at Mrs. Beadle’s, received a witch’s mark above the heart and a familiar, a black kitten called Satan.

The second part – just over a hundred pages in the Swan River Press edition – in effect touches, in a kind of saltant style, on key events throughout the remainder of Jenny’s life. It culminates in an incident that reaches genuine tragedy, during the London ‘blitz’, on 7th September 1940. We discover how Marian prevails on the dark stranger to keep out of Jenny’s life for, first a year, and then for over three years. She also persuades him to encourage Jenny to stay for a summer holiday with Marian’s rector father’s family in the Welsh countryside. None of this avails, because, as Lucifer, rather gloatingly tells Marian, ‘ . . . you can’t put anything into a child, you can only bring out what is there.’

Jenny advances apace along the downward path to witchcraft. Her trip to the rector’s house in Wales is a failure. She practices spells, none of especial malignancy until late in 1939, and then the intended end of her enchantment is very bad indeed; and worse because it actually works.  At times, this second half of Lucifer and the Child suggests a sequence of randomly linked set-pieces to prepare for the denouement of tragedy. But though the journey may strike one as haphazard in places, the hand that guides is assured. The end, when it comes, cannot leave a sensitive reader unaffected. And well before that end arrives, Marian recognises that she has lost the battle. Partly it is her own fault: ‘Some people would say that you had gone to the Devil – you, the professing Christian, with your illicit love.’ (This invites a question as to the inducement that Marian had used to persuade the dark stranger to leave Jenny alone for so long.) But, at the last, perhaps it is just a human thing, never quite to achieve that which one has it within one’s gift to achieve. ‘One means so well and does so badly; always this sense of personal failure,’ muses Marian. The spirit of Arthur Machen infuses and broods over much of this work, both in the nature scenes and in London. With Marian’s resigned recognition of fatalistic insufficiency, one can, perhaps, hear in echo the Welsh-born author’s bleaker and even more terse acceptance of inability to scale anything near the heights that one perceives, whether in truth or in fancy, to be recorded: “I dream in fire but work in clay.” 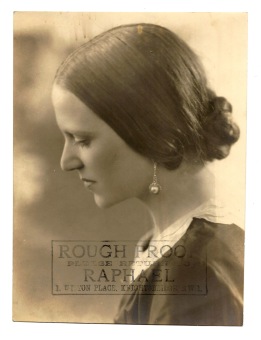 In a short introduction, Ethel Mannin posits the possibility that the question of whether the stranger was really the Devil and the child really a witch can be predicated on either natural or supernatural bases dependent on a reader’s willingness to suspend disbelief. But to the mind of this reader, here we have special pleading which is quite implausible. One is put in memory of Ann Radcliffe’s herculean efforts in her gothic romances to introduce a natural cause for incidents that up to then had seemed the effect of ghostly intervention: but the natural explanation is so contrived that it would have been easier to believe in the ghosts. With Mannin, there are just too many coincidences heaped on coincidences for anything like a ‘natural’ explanation to ring remotely true. In the case of Jenny, she believes and that is the prime ingredient to her acquiring the witch’s power and, later, the ‘asexual passion of loving’ which she feels for Lucifer. As Lucifer tells Marian in one of their disputatious yet cordial exchanges, if he had sought to persuade Jenny that everything that had befallen her in the regard of him, including their first encounter in the forest when she saw him with horns, was liable to natural explanation, she would not believe it – even coming from him. ‘That for her would be the make-believe! She has been touched by the fatal lightning.  She knows! She has seen the stranger in the forest with horns on his head . . . ’  That is amply sufficient to make miracles of evil occur; and occur they do.

Ethel Mannin’s novel drips with frequent delightful jewels of poetic beauty – not least in many passages devoted to description of life in the London docklands and the more irenic if sometimes darkly enticeful charms of the countryside. At one point the author takes time to show her social conscience side, as she expatiates on the manifestations of loneliness in the sexual realm and the futile attempts by impoverished humanity to improve its lot. ‘Lucifer at least has looked upon the face of God, known Infinite Beauty, whereas these, grunting and guzzling in their human sty, what do they know of heaven or of hell?’

In the final analysis, Ethel Mannin’s Lucifer and the Child is – to cite the author’s own words in the penultimate chapter – a tale of ‘ . . . two worlds, the material, and that strange phantom world beyond the bounds of the material, that invisible world for which there is no name, since to call it fantasy, or dream, or imagination, does not suffice, emotion being involved in experience of it, and its phenomena charged with such meaning that the whole texture of the real world is changed, such commonplace things as a curtain blowing out in the wind, or a second glance from a stranger in a crowd, becoming endowed with diabolic significance, exciting, terrifying, sinister, or possessed of a fatal and terrible beauty.’ As Rosanne Rabinowitz points out, in her partly elucidatory, partly biographical introduction, that sensibility which can recognise the innominable character of the effect of sometime strangeness on the humdrum human world of everyday affairs, bodes well for overdue recognition of Mannin’s remarkable novel as a classic in the literature of the weird.

There are few books of which it justly can be said, that having read it will leave a reader changed. Thought-provoked, conscience-smitten, challenged. Lucifer and the Devil is one of them. So, give succour to thy soul with the balsam of goodness – then read.

Order a copy of Lucifer and the Child.

Albert Power is the author of Slaver Heap – A Gothic Novel and Georgian Gothic – A Novella Quartet. His short fiction is published by Egaeus Press. He has written articles for The Green Book.

Thoughts on “Lucifer and the Child” by Albert Power
Loading Comments...