The first thing one learned about Richard Dalby as a person was that Richard didn’t use email. Or at least that was the first thing I learned. Communications came by typed letter, occasionally handwritten (especially the later ones when he was having eye trouble), and even, though less frequently for me at least, by telephone. But let’s face it, there’s something quaint and reassuring about getting correspondence in the post.

Last week I got out all the letters I could find that Richard had sent to me over the years. While I’m sure we started corresponding earlier, I couldn’t find anything dating prior to May 2010. There were no catalogues either—with that little gold return address sticker at the top—which I must have binned after placing my orders. I circled items in Richard’s catalogues the same way I circled toys in the Sears Christmas catalogue when I was a kid. The books always arrived wrapped in brown paper, then newspaper, then another layer of brown paper (this layer bound also with string, sometimes with an added layer of bubble wrap), then under that a plastic bag (carefully taped shut), and then the book. Books Richard sent were wrapped so well they had to be extracted from the packaging by meticulous operation. Nothing ever arrived damaged though. Not once.

Richard’s death last month startled more than a few. I remember exactly what I was doing just before the message came through on my phone. I was at my parents’ house in Wisconsin, flipping through an old issue of All Hallows, looking at the extensive interview I had done with E.F. Bleiler in 2006, thinking Richard would be an excellent subject for a similar career-length interview. The scope of his knowledge and decades of experience, as a scholar, as a book collector and bibliophile, as an editor, and later as a colleague and friend would have made for a fascinating exchange. That’s when my phone buzzed on the nightstand delivering the news.

I first met Richard in Brighton at the World Horror Convention on 27 March 2010. Thinking back now, we certainly must have corresponded before 2010 as conversation was immediately familiar and friendly. I don’t think I’d ever seen a photograph of Richard prior to meeting him in Brighton, so was struck by his boyish appearance. It conflicted with the fact that his publication history goes right the way back. Jesus, how old was this guy? Not that old at all as it turned out. 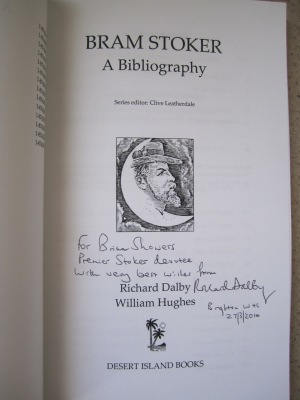 But Richard wasn’t just boyish in appearance; he had something of that youthful manner about him too. Maybe curiosity is a better word for it. He was inquisitive. After brief salutations and nice-to-finally-meet-yous, Richard immediately launched into questions. I’d been working on Stoker a lot in those days, and he wanted to know what I knew about “X” edition, or if I had ever been able to track down the exact publication date of “Y”. Of course I hadn’t. Sure, I know more than the average person does about Stoker, but Richard’s knowledge far exceeded mine and by no small amount. And yet he asked me questions anyway because that’s how Richard seemed to work. He probed, asked questions, compiled, collected, and collated. I think that’s one of the key qualities Richard possessed that made him such a good researcher, bibliographer, and anthologist.

That’s pretty much how our correspondence went too: Richard would ask me questions and I mostly answered with the written equivalent of a blank stare and a shrug. I asked Richard questions and he responded in more detail and depth of knowledge than I ever would have imagined. He was generous that way, and I’m sure I’m not the only one who benefited from his knowledge.

So there we were stood in the Royal Albion Hotel in Brighton. He’d just asked me numerous questions on Stoker-related bibliographic mysteries, and what could I say? How could I respond? I opened my bag and took out my well-thumbed Bram Stoker: A Bibliography that Richard had co-written with Bill Hughes. I asked him to sign it. He did. As he wrote in my book, I kept thinking: “Why are you asking me these questions, Richard? You literally wrote the book on the subject.” But he treated me as a colleague right from the start. This Stoker bibliography—which I still consult—is one book of two that I now have in my collection kindly inscribed to me by Richard.

Richard was also kind enough to edit one of Swan River Press’s Bram Stoker Series booklets, To My Dear Friend Hommey-Beg: The Great Friendship of Bram Stoker and Hall Caine, which I published in 2011. Much of our early correspondence centred on Bram Stoker, but also Algernon Blackwood, Lord Dunsany, and as the years went by an increasing number of more obscure Irish writers. By autumn of 2010, Swan River Press had shifted from publishing chapbooks and booklets to limited edition hardbacks. Not only was Richard enthusiastic about this, but frequently offered his advice and expertise.

I remember Richard was especially keen to see Mervyn Wall back in print, and in advance of Swan River’s reissues of The Unfortunate Fursey and The Return of Fursey in 2015, Richard allowed me to reprint his article “Mervyn Wall: Irish Author and Satirist” in the second issue of The Green Book. He also sent me a photocopy of Dorothy Macardle’s rare ghost story collection Earth-Bound, which I eventually reprinted in 2016. So too did Richard help fill in my A.E. collection by sending me stray volumes that he accumulated over the years. He was eager to see the sesquicentennial edition of A.E.’s Selected Poems, which I published in early April 2017. I sent him copies of the book—I’d gotten into the habit of sending him a few copies of everything I published—but I did not hear back from him, nor would I. I knew he was still having eye trouble, but I hoped that he had time to open the package and that he liked the book.

Richard’s generosity continued over the years, and even as I look around my office here in Dublin, I see a great number of books he had sent me. He knew I was on the lookout for obscure volumes, mainly Irish, and occasionally Richard would send letters with lists of books he had acquired, offering them with the note “free to you”. I sometimes think he picked up spare copies just so he could send them to people who were looking for them. There are early editions of Stoker and M.R. James from Richard on my shelves, books by Cheiro, some Le Fanu, a cherished first edition of Blackwood’s The Bright Messenger, and an odd little volume, Thirty Stories by Elizabeth Myers (simply because he thought I might like it), among many others.

Not long before his eyesight became even more troublesome, I got another such letter telling me he would soon be “downsizing” his Dunsany and Blackwood collections. Although he never got around to sending me a list of those titles, he wrote that he would soon be getting rid of the first editions which he “no longer needed to keep”—“Free to you,” he added. Generous as always, no doubt, but even then there was an odd hint of closing-time about that handwritten letter. It was always “Free to you”. Richard was either a very good bookseller, or a very bad one—depending on your perspective, I suppose.

Earlier this year I asked Richard if he would contribute to an ambitious project I have embarked on. Inspired by Bleiler’s Supernatural Fiction Writers, Neil Wilson’s Shadows in the Attic, and other similar reference books, I’d decided to put together an encyclopaedia of Irish supernatural and fantastical fiction writers. With his scope of knowledge, Richard was one of the first people I approached. I sent him a letter with my list of authors and waited. What came back was a half-page list of ten authors about whom he wanted to write—many on which he’d already written; authors who he had revived and got back into print; authors who were on my list because Richard had introduced me to their work in the first place. Apart from the date in the corner (January 2017), there was no further comment, just the handwritten list. A week or so later I received what would be a short, final letter: a Christmas and New Year’s greeting, a few brief but enthusiastic comments about the encyclopaedia project, and the hope that with regard to his eyesight “all will improve this year”.

The last time I saw Richard was at the Friends of Arthur Machen annual dinner in York on 5 March 2016. I didn’t know he would be there, but was glad to see him again. We chatted a bit about the then forthcoming Dublin Ghost Story Festival, he regretted that he couldn’t make it, but was hoping to attend if we decided to host another. Richard that day wore an oversized jumper and I remember watching him inspect books that were to be auctioned off before the dinner. He picked them up one by one, bringing each one close up to his eyes to read the titles before depositing them back on the table. Richard bought two or three odd volumes costing not more than a few pounds. I don’t remember what the titles were, but I do recall wondering what his interest in them was. As for me, I bought a copy of The Haunted Chair and Other Stories by Richard Marsh, which Richard had edited for Ash Tree Press back in 1997. Richard was sat beside me in his oversized cream-coloured jumper, his hair was whiter than I’d remembered. I asked him if he would sign the book. He did. It’s the second book in my collection inscribed to me by Richard.

He made a quick exit shortly after that. Said he had to catch a bus back to Scarborough. I wish he would have stayed for the dinner. 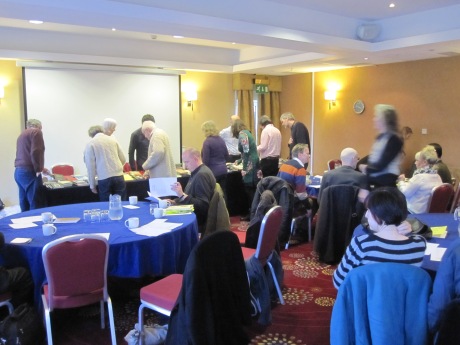 Richard Dalby has left his scholarly imprint on many hundreds of books and journals, not just those he edited or compiled himself, but those volumes that he shepherded into publication with the generosity of his knowledge and genuine love for supernatural literature. Back in 2014 Richard wrote to me: “I still have around thirty ideas for excellent collections and anthologies.” I suspect he was being modest. And it might be a selfish thing to write, but I hope hints of those books might still be discovered among his papers.

The loss of a friend and colleague is and always will be a horrible thing, and with someone like Richard that loss goes for double—along with him went a vast amount of knowledge. Commiserations regarding Richard’s death have been circulating the literary and small press communities these past weeks, and no doubt the void he left will not be filled any time soon.

I got an email from Peter Bell a few days ago. Like Richard, Peter also signed up to contribute to my Irish encyclopaedia, offering to write the entry on Katharine Tynan. Like many of us, Peter had looked to Richard for advice and assistance. Before he died, Richard gave Peter a copy of Tynan’s 1895 collection An Isle in the Water. “Some time ago,” Peter wrote to me in the email, “I’d asked Richard for more information about Tynan. With strange serendipity I opened the copy of Isle in the Water, and inserted I found notes on her Richard had sent with it . . . As if his spirit were still abroad!” Something tells me we are still in good ghostly company.

Richard, you are missed.

This reminiscence originally appeared in A Ghostly Company Newsletter 58, Summer 2017. Mark Valentine’s obituary for Richard can be read on the Wormwoodiana Blog.