Occasionally I like to write about how a Swan River book can come together. Back in 2015, I wrote a short piece on how we assembled our edition of Lafcadio Hearn’s Insect Literature, a beautiful book that is now unfortunately out of print. (Though you can still read about how we put it together!)

This time I’d like to write a little about Selected Poems by A.E. (George William Russell, 1867-1935), which we published in April 2017 to coincide with the bicentenary of the great poet’s birth.

A few years prior to the sesquicentenary, I realised there was no proper edition of A.E.’s work in print. Sure, a few cheap print-on-demand volumes of his mystical writings are floating about, but let’s face it, the content of those sort of things can be dodgy at the best of times, often going unedited and rarely even proofed or decently typeset. Caveat emptor. And given that A.E.’s work is no longer fashionable in the Irish literary world, I knew that a new edition done right would be up to Swan River. 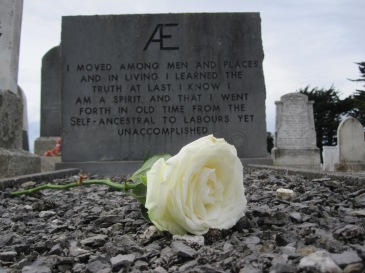 I can remember the precise moment I decided to reprint A.E.’s work. My house isn’t too far from Mount Jerome Cemetery, in south Dublin, where A.E. was laid to rest on 17 July 1935. As I was stooped down to remove clumps of moss and other debris from the chipped stone atop his grave, the thought entered my mind: in 2017 I would reprint something by Ireland’s foremost mystical poet. But what? Would I create my own selection? Ask a contemporary poet to complete such a task? Or maybe I would reissue a prose work, such as his thin short story collection The Mask of Apollo (1905). I did not ponder this question for long. A definitive answer arrived a few weeks later.

Over the years I have amassed quite the collection of first editions of A.E.’s work. Shortly after that visit to his resting place I found a first edition copy of Selected Poems, originally published in autumn 1935, just a few months after its author died. This particular copy of Selected Poems still had its original dust jacket, on which were inscribed the words: “If I should be remembered, I would like it to be for the verses in this book. They are my choice out of the poetry I have written.” It would appear A.E. himself had given me the answer. I decided then and there to honour the will stated so clearly before me.

The painting of A.E. on the cover of Selected Poems is by the husband of Constance Markiewicz: Count Casimir Dunin Markiewicz (1874-1932). The original is held by the Hugh Lane Gallery in Dublin, and just so happened to be on display at the time I was working on this project. So I wandered up one weekend to have a look. After I had seen the painting, it struck me that perhaps we could re-interpret the 1935 jacket, reproducing Count Markiewicz’s painting, but of course this time in colour. The gallery kindly obliged, and so the project began to take shape.

Next I asked Meggan Kehrli, Swan River’s long-time designer, to lift the typeface of the title, author’s name, and inscription from the cover of the first edition jacket. We did this trick for both Insect Literature and Longsword, and it works pretty well. Although most readers won’t necessarily notice this subtle design choice, I like knowing it’s there. Of course you can compare the two covers above to see both their similarities and differences.

On the title page we reprinted the “Sword of Knowledge”. This emblem, a downward-pointing winged sword designed by the poet, is emblazoned on the free front end papers of Cuala Press’s multiple A.E. volumes. The keen-eyed will notice that it is also carved into the lower right-hand corner of the poet’s tombstone.  It only seemed appropriate to include it on our title page as well.

Finally there was the question of the printed paper case — that’s the image that’s printed onto the boards underneath the dust jacket. It’s become a feature of all Swan River books that this image is different from that on the jacket cover, allowing readers to discover something beneath the jacket of each of our books.  Given that A.E. also produced a wealth of beautiful paintings depicting his visionary experiences, I started the search to find the perfect picture.

Again, I didn’t have to search too long before I found what I was looking for at the National Gallery of Ireland. There they had one of A.E.’s paintings given the rather uninspired posthumous title “A Landscape with a Couple, and a Spirit with a Lute”. Of course the painting depicts exactly that — but for the purposes of our project it spoke of so much more. It was perfect. The golden figure, with its radiant headdress and lute, appearing before an awestruck pair, seems to me the very embodiment of Song, an extension of the mysticism A.E. also sought to express in his writing.

Just as A.E.’s poetry and prose were glimpses behind the veil, so too did I want a scintillating image beneath our purposefully staid dust jacket — so that each reader here too could glimpse behind the veil, turning the cover into a sort of interactive metaphor. In the photo at the left you can see the book with the jacket both on and off.

Needless to say, Selected Poems by A.E. is a book that I’m quite proud of, and I hope you like it too.

After that visit to Mount Jerome, the book just sort of came together. The elements I required materialised as I needed them, and the finished volume was published on 10 April 2017 — just in time for the poet’s 150th birthday. This project was, for me, an exceedingly special one. I would like to think that A.E. himself would be proud of this book.

If you’d like to read more about A.E., including who he was and why he is an important contributor to Irish literature, I wrote another piece about him that you can read here.

I also wrote an essay called “Hidden Aeons: Searching for a Literary Relic” detailing how George William Russell found is pseudonym and true self.

And of course, if you’d like to by a copy of Selected Poems, you can do so here.