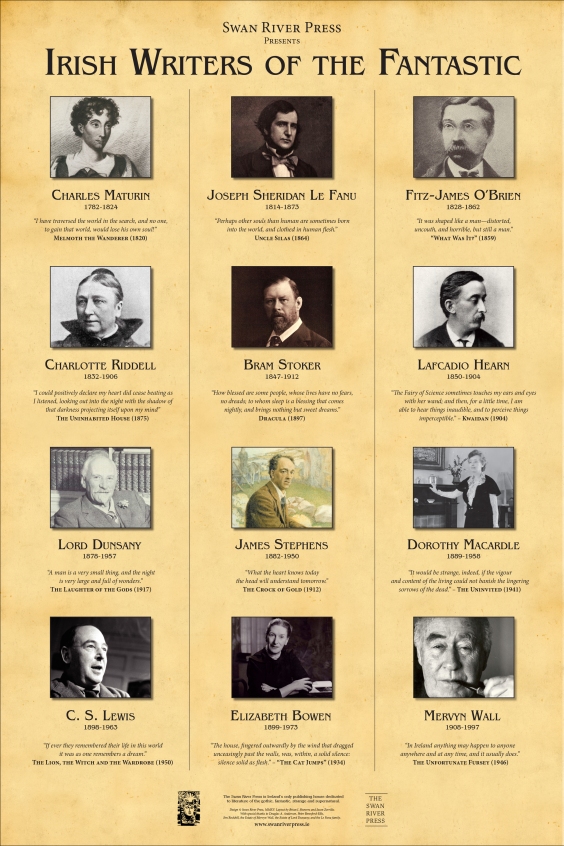 I’m sure you’ve seen the ubiquitous “Irish Writers” poster around Dublin. It depicts the usual suspects: Wilde, Yeats, Joyce, Beckett, et cetera. A while back the Irish Times published a reply to that poster, again entitled “Irish Writers”, but this time featuring only women (as the original featured only men). You can view both posters here.

Despite the strengths of these two posters, I felt there were still a few conspicuously absent faces.

As Swan River Press is Ireland’s only publishing house dedicated to what might broadly be termed “literature of the fantastic”, I felt it up to us to submit our own entry into the cavalcade of Irish literary posters.

As our treat to you this Halloween, I’d like to present Irish Writers of the Fantastic.

The poster was designed to give an overview of these worthy and often overlooked Irish authors. Some you will recognise, others you will not. Some, such as Bram Stoker and Lord Dunsany, have had a profound impact on international literature. Others, like Fitz-James O’Brien and Dorothy Macardle, will be more obscure. But each one is worth discovering or revisiting this Halloween season.

Ultimately I hope you will find something of interest among them. There are both men and women included in our poster. Writers who are world renowned and those who are less well known. There’s horror, fantasy, science fiction, supernatural, satire . . . You’ll find here writers from both the Republic and Northern Ireland, and their contributions to literature span the better part of two centuries.

However, as is the nature of lists, I hope you will disagree with this one. With any luck, you’ll be only too eager to point out someone that deserves to be included, but was not. And I hope you do. And when you do in the comments below, tell us why you think they should be included (and might they bump someone off the list?) Don’t grunt, elucidate! That second part is the most important bit. Because, above all, this poster is meant to get people talking about these writers . . . and then running to the nearest bookshop or library to read their works. In the meantime, Swan River Press will continue to lead the way in their rediscovery.

Anyone with a further interest in Ireland’s contributions to the genre might want to check out our twice-yearly journal The Green Book, which features commentaries, articles, and reviews on Irish gothic, supernatural, and fantastic literature. Until then . . . 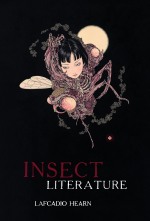 Irish Writers of the Fantastic

10 thoughts on “Irish Writers of the Fantastic”